Also known as: upasarga ("placed before")

As you might remember, there are about 2,000 different verb roots in Sanskrit. For most sentences, these 2,000 verb roots are sufficient. But for more complex sentences, verbs often need to be more specific. Fortunately, Sanskrit gives us a way to create new verbs. We can use these verbs in the same way as the verbs we've studied so far.

To create a verb, we attach a small term to the front of the verb root. Any sound that is attached to the front of a word is called a prefix, and the sounds we'll study now are called verb prefixes. There are about 20 different verb prefixes, and each has a special meaning. We can combine a prefix with a verb root to create a new and more complex idea.

How do we use prefixes?

Let's look at some examples. Below are some new verbs that are made from the root gam. Like a plain gam, each new verb has a general sense of moving or going. But, you can see that the prefixes make the verb much more specific.

We can also use multiple prefixes for a single verb. In the example below, two prefixes are used with the same verb root. upa puts more emphasis on "approaching," producing a more complex idea:

The prefix that sits closest to the verb tends to have the most influence. For example, consider the slight difference in meaning between upasaṃgam and samupagam:

Although the examples here all clearly show the influence of the prefix on the verb's meaning, don't make the mistake of thinking that all prefixes always do so. In many situations, a prefix doesn't do much anything at all; in others, a prefix may act in an unexpected way. But, we can still say that prefixes generally behave as described above.

You may have noticed that the m of sam changed to the anusvāra in front of the g of gam. Prefixes follow the normal rules of sandhi.

If you've heard some Sanskrit words before, you've probably seen this prefix. It occurs in names like saṃjaya and terms like saṃsāra. It's also the sam in saṃskṛta, which is where the word "Sanskrit" comes from! In all three of these words, sam takes the meaning of "completely" or "absolutely."

These prefixes are all very common. They are so common, in fact, that the second verse of the Bhagavad Gita contains all four of them! The verse is provided below so that you can see for yourself. (Note that the verse uses many words and concepts that we haven't studied. Just pay attention to the highlighted parts for now.)

Even though we haven't studied much Sanskrit, we know enough to understand many parts of this verse.

dṛṣṭvā comes from darś, which is related to paśya and means "see." And what is seen? pāṇḍavānīka, which is in the object case. We can't be sure of what this word means, but it contains the word pāṇḍava, which you might recognize (click here if you don't). We see the word duryodhanaḥ, which changed to duryodhanas due to sandhi. Duryodhana is the name of a character in the Bhagavad Gita. From all of this, we can say that Duryodhana sees something related to the Pandavas.

That's the first line; now, let's take a look at the second. We can guess that upasaṃgamya comes from upasaṃgam, meaning "approach." And what is being approached? acārya, which is in the object case. You might be familiar with this word already (click here if you aren't); it refers to a teacher or spiritual master. The rest of the line is difficult to understand, but rājā should look familiar (click here if it doesn't). This is a tricky noun. It seems as if the stem is rāja and the noun is in the case-1 plural, but it's actually from a different class of nouns altogether. We can't say how it refers to the rest of the verse, but since Duryodhana is a king, the word probably describes him. From all of this, we can say that Duryodhana, who is connected to the idea of "king" somehow, approaches a teacher.

We can combine these two lines and get a very loose translation: Duryodhana sees something related to the Pandavas and, being a king, approaches the master. This translation has some serious flaws, but it's a remarkable match with the correct one:

But then, having seen the army of the Pandavas arrayed, King Duryodhana approached his master and spoke this word.

Here are five more letters for you to learn.

च and ज are easily confused. Notice that ज has a sharp point, almost if it were jabbing the letter next to it.

Conjunct consonants: Reading in a Z

If you have been doing the Devanagari exercises, you might have seen the conjunct consonant श्च (śca) a few times. Unlike the other conjunct consonants we've studied, this one features one letter on top of another. Such combinations are uncommon, but they are not rare:

Do you know how to read these combinations?

The trick is to read these combinations in a Z pattern. Start in the upper-left and move right. Then, move down to the left. Finally, move right again to finish up. All conjunct consonants follow this pattern. 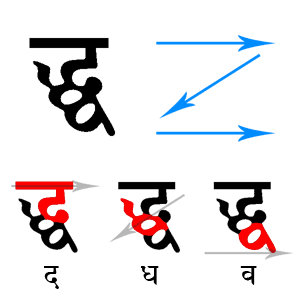 Most computers do not have the files necessary to support these complex combinations. Perhaps that is a good thing. But you must remember that they still exist. Now that you know how to read them, they shouldn't give you much trouble.