Sanskrit words and sentences undergo many different kinds of sound changes. Vowels might combine or become consonants. Consonants might shift from one class to another. And even more extensive transformations are possible. Together, these sound changes are called sandhi.

Many Sanskrit students learn a basic version of sandhi in the course of their studies. But Pāṇini is not content with modeling the basics. Instead, his goal is to model all of Sanskrit's sandhi rules as fully as he can. And to do so, he creates several devices that let him express these rules clearly and concisely.

In this unit, we will learn about the specific techniques and devices that Pāṇini uses to model Sanskrit's sounds and sandhi rules. Starting from scratch, we will build up his core system step by step. And by the end, we will have a simple but complete system that contains most of the Aṣṭādhyāyī's essential components. Once we have that basic system in hand, we can explore the rest of the grammar and see how the Pāṇinian system works in practice.

The notes below provide a summary of the Sanskrit sound system. If you know Sanskrit already, you can continue to the next lesson.

Most Sanskrit sounds are pronounced with five places of articulation within the mouth. You can see these five points marked in the image below: 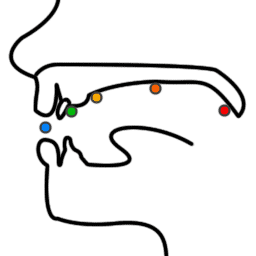 From right to left, these five points are:

The colors below differ from the ones used in the image. The image uses red, orange, yellow, green, and blue. Respectively, we use red, orange, green, blue, and purple below.

First are the vowels. The first nine vowels are called simple vowels:

And the others are called compound vowels since they are made from combinations of the simple vowels:

Of these vowels, five (a, i, u, ṛ, ḷ) are called short. The others are called long and are pronounced for twice the duration of the short vowels. There is also a third length, pluta (prolated), that is much longer and much rarer.

All Sanskrit vowels can take one of three accents: udātta (high), anudātta (low), and svarita (mixed). And they can be either nasal or non-nasal. So each of the vowels above has 3 × 2 = 6 variants.

Next, we have the first twenty-five consonants.

This is a grid with five rows and five columns. Each row in the grid uses a different place of articulation, and each column encodes different properties:

Next are the semivowels, which have a close relationship to the vowel sounds. All of them are voiced:

(Technically, va uses two points of pronunciation. But this is a minor detail, and it can essentially be treated as if pronounced only with the lips.)

Finally, we have the sibilants. ha is voiced, but the rest are unvoiced:

When sounds are pronounced continuously, they can change each other's pronunciation. Sandhi is the name for these sound changes.

Most sandhi changes are between two sounds that appear next to each other in continuous speech. Here are some examples of common sandhi changes:

Some sandhi changes are optional and are applied at the speaker's preference. Also, sandhi changes might be allowed or blocked in different environments, such as: