Each chapter ends with a reading exercise. These exercises take the concepts from the chapter and place them in a real and more relevant context. Here, we will read some of Bhagavad Gita. But some of you might be wondering: what is the Bhagavad Gita, and why does this guide mention it so often? 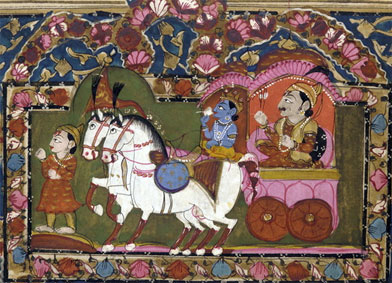 When it was first composed, the Bhagavad Gita (bhagavad-gītā, the "song of the blessed one") was different from almost every religious text before it. Set within one of the two Indian epic poems, it discussed philosophical and spiritual matters in the context of an extended narrative. The core of the text is a dialog between Krishna (kṛṣṇa) — variously considered to be a manifestation of some god, a manifestation of the supreme god, or the supreme god himself — and Arjuna (arjuna), his best and dearest friend. This conversation is overheard by Sanjaya (saṃjaya) and narrated by him to Dhritarashtra (dhṛtarāṣṭra); and this conversation is itself heard and discussed by two characters in the epic poem, and so on down to the person singing the poem and the listener himself.

The setting of the Bhagavad Gita (or just "Gita" for short) is essentially this: for the sake of their honor and duty as warriors, Arjuna and his four brothers must fight their cousins, with whom they had a terrible dispute. Warriors and kings from all over the world joined the two sides to prepare for a tremendous war. Many of Arjuna's relatives and friends, for reasons that would take too long to explain, are bound to fight on the side of Arjuna's cousins. Then, when every attempt at resolving the conflict between the two groups has failed, they assemble on the field of Kurukshetra (kuru-kṣetra, "field of the Kurus"; "Kuru" is a family name referring to the ancestor of Arjuna and his cousins). This is where the Gita starts.

The Gita is divided into eighteen chapters, and the first of these sets the stage for the rest. With Krishna as his charioteer, Arjuna goes to the center of the battlefield before the war begins. Seeing his relatives, friends, and teachers arrayed on both sides, he despairs at the thought that he will have to kill everyone he loves. Declaring to Krishna that he will not fight, he sits down on his chariot seat having cast aside bow and arrow, his mind overwhelmed with sorrow.

The rest of the text describes Krishna's efforts to change Arjuna's mind. Each chapter offers a different argument for action over inaction, and the human problem of violence and war slowly changes into a detailed philosophical discussion about the nature and qualities of matter and the nature of the fundamental "Self" that all beings share. In chapter 11, Krishna lets Arjuna see his divine form. The remaining chapters clarify Krishna's message, and the last ends as Arjuna affirms that his doubts have left him. Sanjaya has the last word:

Where there is Krishna the lord of yoga, where there is Arjuna bearing his bow,
there is certainly glory, victory, prosperity, and wise conduct — such is my conviction. Bhagavad Gita 18.78

The Bhagavad Gita is immensely popular around the world, and part of the reason for its appeal is its multivalence; that is, it is a flexible text with many interpretations. Over the years, dozens of different approaches to the text's message have appeared. But although its main meaning is ultimately elusive, its grammar is simple and straightforward. For that reason, this guide will feature many excerpts from the Bhagavad Gita. This short introduction will do well for now.

Although the Bhagavad Gita was an important text in ancient and medieval India, it has only become very popular in recent times. In fact, its recent popularity is largely due to British colonizers, who searched for a Hindu equivalent to the Christian Bible and elevated the Gita to that position. Agehananda Bharati (birth name Leopold Fischer) argues this point in "The Hindu Renaissance and its Apologetic Patterns," a difficult but fascinating essay on the changes in Indian religious practice after colonization. The excerpts below are relevant to our talk of the Gita here:

Indians and sympathetic occidentals alike have come to regard the Bhagavadgita as the Hindu Bible. No challenge against this notion has ever emerged... The people who might challenge it are the ones that won't: The grassroots scholars, the orthodox pandits, cannot participate in the give-and-take of the Indian Renaissance with its English language premises, due to lack of economic and social access... But the informed Hindu must contest the Bhagavadgita's Renaissance status: it is not canonical like the Vedas or the Upanisads; it... [belongs] to a category of texts the acceptance of which is not incumbent on the Hindu. ... Most modern Hindus, unless they happen to be Sanskritists, assume that the Gita is a canonical text. Historically seen, the suzerain status ascribed to it is another paradigm of the pizza-effect... It was Annie Besant's impressionistic English translation of the text which impressed Gandhi when he read it in London... Journal of Asian Studies, Vol. 29, No. 2, pp. 274-5 (emphasis added)

Still, we should remember that great religious figures have written commentaries on the Gita for at least a thousand years. The Gita is still an important text.

Here, we will read the first 30 verses of the Bhagavad Gita to practice our pronunciation. Sanskrit from the Bhagavad Gita is easy to read and pronounce, and it has a nice mix of heavy and light syllables. The recording that we'll use is in the so-called "northern" style, which is more melodic and has slightly looser pronunciation. Despite this, the chanter here does a fairly good job.

As you listen and read along, notice the following:

The video goes on for almost 11 minutes, but we'll only listen up to the 9 minute mark — but of course, you are welcome to stop wherever you like, especially if you are confident in your pronunciation. Whenever you feel ready, click the link below follow along with the text:

The "stick" character (।) is used to separate the text into verses and lines. The apostrophe (') can be ignored for now.