Please use our updated grammar guide.

I can think of no better way to start our study together than with this quote, for at once it captures the importance, the esteem, and the danger of the Sanskrit language. Its importance is plain: Sanskrit was once the most influential literary language in India, and texts written in the language could be understood by millions of people throughout the South Asian world. These texts contain profound meditations on every point on the spectrum of human concern: existence, reality, God, love, duty, marriage, war, sex, death, violence, laughter, beauty, perception, nature, anatomy, urbanity, ritual, desire, food, purpose, meaning, and language, among hundreds of others. Moreover, Sanskrit texts are the repository of non-modern modes of thought, and they present distinct conceptions of the world that are often at odds with the understanding we have today. By learning how people used to think, we better understand both ourselves and the world we have inherited.

Given the immensity and reach of Sanskrit literature, it is no surprise that Sanskrit itself has found admirers. Over thousands of years, the people within the Sanskrit tradition — who learned the language not at home but in rigorous schools — praised the language and continually improved its status. What was once called merely "language" was later called "perfected speech," and even later the "language of the gods." The word "Sanskrit" itself is the most recent in a long line of names, and it is a name that the first Sanskrit speakers never used. The word has been translated in dozens of ways: "perfected," "perfectly made," "put together," or just "assembled." Ultimately, all of these meanings are part of the word "Sanskrit."

Sanskrit was dangerous, then, because anyone who studied it might see it as an end to understanding rather than a means to it. For this reason, the man who was later called by the name "Buddha" refused to let his disciples translate his words into Sanskrit, perhaps because he hoped his disciples would focus on his ideas instead of the language that contained them. But as Sanskrit grew in stature, reach, and utility, this concern was brushed aside. Ironically, some of the most popular Sanskrit texts today — religious and otherwise — were written by Buddhists.

The language that eventually became Sanskrit was once an everyday language used by all people in society. Later on, however, it became almost exclusive to male Brahmins, who rigorously preserved it as a sacred language. But in time, Sanskrit became so much more: a timeless and placeless language that yielded such profundity and exquisite beauty that even today, it lives with its treasures in the cultural conscience of South Asia and places beyond. Still, we must be careful to not oversimplify the dynamism and complexity of Sanskrit's use, development, and reputation. It is a subject that has filled book upon book, and no tidy summary can give a good sense of its complexity and vigor. At the least, you must always remember that Sanskrit was just one part of the complex South Asian world. Sanskrit quickly became the language of the male religious elite, and the voices of all other parts of this world disappeared almost without a trace. But if we want to look to the distant past and learn more about its traditions, Sanskrit is one of the surest guides we have.

By learning this language, you open the door to more than three thousand years of intellectual history, both in India and beyond. This is an ocean that no person can hope to cross; but let's set sail and see where Sanskrit will take us.

The origin of Sanskrit

This part of the introduction discusses modern efforts to determine Sanskrit's origins, including when and where it was first spoken. If you'd rather skip this sort of discussion, click here to skip further down the page.

If it is true that real people once spoke Sanskrit natively, then we must ask: how and when did Sanskrit first appear? We are not sure, and it is impossible to know. However, there are some very good theories. The most popular of them arose when Western scholars started to study Sanskrit. These scholars had a significant advantage that Indian scholars did not: they had studied Greek and Latin, which are both deeply similar to Sanskrit. Take a look at some of the words that all three languages share, and compare them to their English equivalents as well:

The Sanscrit language, whatever be its antiquity, is of a wonderful structure; more perfect than the Greek, more copious than the Latin, and more exquisitely refined than either, yet bearing to both of them a stronger affinity, both in the roots of verbs and the forms of grammar, than could possibly have been produced by accident; so strong indeed, that no philologer could examine them all three, without believing them to have sprung from some common source, which, perhaps, no longer exists; …Sir William Jones, in a speech delivered to the Asiatic Society in February 1786 (emphasis added)

This quote is well-known, and for good reason: it marks the beginning of a fantastic period of scholarship into the history and origin of these languages. Scholars of these languages, which are collectively called the "Indo-European languages," wanted to answer one question above all others: where did these languages come from? 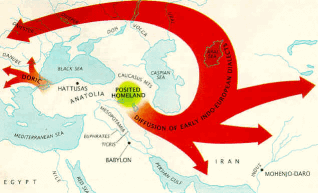 A proposed map of the migration of PIE. India is in the lower-right corner. From columbia.edu, originally from uni-duesseldorf.de.

India is the cradle of the human race, the birthplace of human speech, the mother of history, the grandmother of legend, and the great grandmother of tradition. Our most valuable and most instructive materials in the history of man are treasured up in India only. Mark Twain

It quickly became clear that Sanskrit — along with languages like Latin and Greek — likely descended from a single language that was different from all three of them. We don't know what this language might have been called. Today, most people call it Proto-Indo-European, or PIE for short. We also don't know when this language might have existed; but, it was likely used some time before 3000 BC. PIE is hypothetical, and no record of it remains; but over the years, our picture of the language has become clearer, and now we have a fairly good understaning of what it must have been like. Although we can never be sure of this picture, there is a substantial body of evidence to support it.

Scholars have proposed many places of origin for PIE. At first, one of the more popular theories was the Out of India theory. Over time, however, most scholars have concluded that PIE likely came from the Eurasian steppe near modern-day Turkey. Again, we can never be sure that this is where the Indo-European languages came from. Many other places of origin have been proposed, and the evidence available is not always strong. But, the current consensus is that PIE came from the Eurasian steppe. 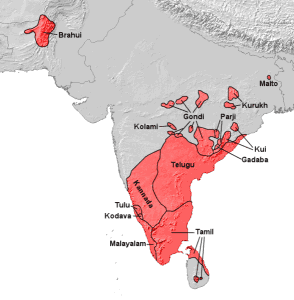 Whenever I have read any part of the Vedas, I have felt that some unearthly and unknown light illuminated me. In the great teaching of the Vedas, there is no touch of sectarianism. It is of all ages, climbs, and nationalities and is the royal road for the attainment of the Great Knowledge. When I read it, I feel that I am under the spangled heavens of a summer night. Ralph Waldo Emerson

The history of Sanskrit

What is important to bear in mind, however, is that [Sanskrit] never fully became — and almost certainly never had been — a code of everyday usage. It was never the language of the nursery, the bedroom, or the field, although since Sanskrit poets experienced childhood, love, and (no doubt some of them) labor, they learned to speak of these things, too, after their fashion, in Sanskrit. Sheldon Pollock, "Sanskrit Literary Culture From the Inside Out" (emphasis added)

In the strictest sense of the term, Sanskrit refers to a later "preserved" form of the language of the Vedas, a set of ancient compositions among the oldest known in any Indo-European language. The older form of the language, variously called either Vedic Sanskrit or just Vedic, was likely the native language of its users. But from the Vedas onward, the language started to lose many of its features. Then, around the 5th century BC, a grammarian known as Panini (pronounced "paa-ni-nee" in English) essentially "froze" the language, transforming it from the fluid native language of the ancient Indians to an unchanging and timeless language for intellectual expression, both in India and in the whole of South and Southeast Asia. Near this time, the last native speakers of Sanskrit had probably already died.

Panini's work marks the beginning of "normal" Sanskrit, which is sometimes called Classical Sanskrit for clarification. This is the form of Sanskrit that we will study in this guide. Although Panini's work defines Sanskrit grammar, it will not be discussed in this guide. Panini's method is compact, but it is only useful if you have the time to memorize thousands of grammatical rules. Somewhat ironically, it also requires you to know a substantial bit of Sanskrit beforehand.

"What will I learn?"

Right now, you may know nothing about Sanskrit, or you may have no experience with a second language — and that is OK! We will start small, from the most basic of definitions. From there, we will slowly spool our understanding of grammar until we know enough to read simple passages. We will read selections from all parts of Sanskrit literature: epic poetry like the Bhagavad Gita, lyric poetry like the works of Kalidasa, prose works like the Upanishads, hymns from parts of the Vedas, and much more.

This guide is here to help you take this millennia-old "language of the gods" by the horns, so that it might lead you wherever you want to go. Good luck! (Please use the contact page if you have any problems, questions, or comments. All messages are read and are greatly appreciated.)

To move on to the next page, click next → on the bar below.